The 3rd match of the India vs South Africa series is all set to take place. The match is crucial to the chances of the both the teams. While India’s aim will be winning the game, and continue the dominance in this format outside the sub-continent, South Africa on the other hand needs to win this one, and look for a fight back in this series. At present scenario, it won’t be wrong to say that India looks way ahead compared to the depleted host.

Date:7th February, 2018
Time: The play is expected to begin at 4:30 IST, unless there is a delay.
Venue: The match is going to be played in Newlands, Cape Town. This ground is quite favourite to the Proteas as their win percentage here.
TV Broadcast: Live Telecast of this match will be shown on Sony Ten 1, Sony Ten 1HD ( For English ) and Sony Ten 3, Sony Ten 3 HD ( for Hindi ).
Streaming Link: You can watch this match live by using Sony Liv App or you can go to the website

South Africa has been in a spot of bother with their team in this series. After AB de Villiers, Faf du Plesis, it is Quinton de Kock who is out with an injury in the wrist. De Kock has been crucial to SA’s success with both bat and glove-work. His absence means that the balance of the team is completely shifted, and they have to look for an opener and a wicket-keeper in the mix. 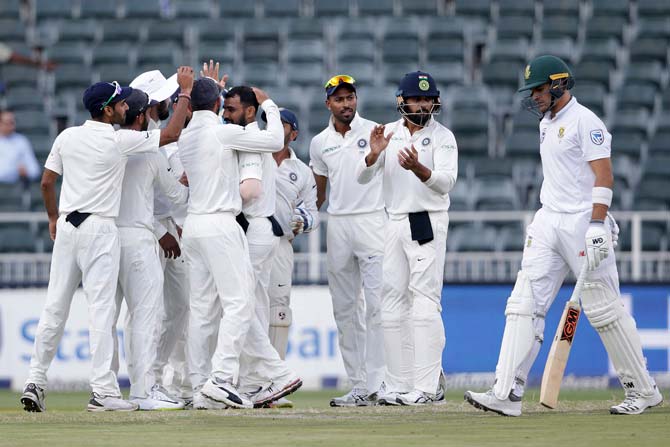 Whereas, India looks to be solid in place. They don’t have any problem in the entire squad as such. They have each and every options in hand and will go in for the game with an optimistic mindset. The only problem which may bother them a little, is there fifth bowling option. If Hardik doesn’t give them full 10 overs, then they are solely dependent on a partimer like Kedar.

There is particular no reason why the captain will be changing the pkaying XI. Though there will be expectation from Rohit to make it big as he not has not been able to do something with the bat. Also Hardik’s performane is crucial to the chances the team.

With the absence of de Kock in the XI, there is going to be a new opening partner with Hashim Amla. Most likely, captain Markram will come out to open the batting. South Africa’s success will heavily depend on the bowler. Morkel and Rabadda needs to get the initial wickets.

South Africa Team had always done well in Newlands, Cape Town. While India has the worst win percentage record in South Africa away from home. So, in this scenario its a great opportunity for the Indians.
Present Form

On paper, India looks way ahead of South Africa even in their own backyard. However, if players like Hashim Alma, Morne Morkel and Rabadda can make it big on the day, then the battle is going to be exiting. Also, the impact of the result of the series is going to be the ICC rankings. So both the teams will fight extremely hard for this particular match as this match decides the direction in which the series is heading.