Trevor James Morgan, a name that is deeply associated with Indian football, more specifically Kolkata football. The Brit-Australian Coach has been part of many glorious moments, mostly for the Red and Golds but his departure last time was probably not filled with positive emotions. But as he would say,”That’s how professional football works”!

After a sabbatical from football coaching, the former Bolton Wanderers striker would be seen back to his business, this time as the Head Coach of Bhutan National Team. Talk Sports 24X7 decided to catch up with the man himself ahead of this new chapter of his life and Trevor James Morgan spoke about his expectations from the new assignment to his thoughts on Indian football.

○TS 24X7: First of all congratulations Mr. Morgan for getting charge of Bhutan National Team. This would be the first time in your career that you will be at the helm of a National side. How are you looking forward to this challenge and what’s the duration of the contract?

●Trevor: I have been given a 2 year contract and will try to work with the players and alongside the other Coach’s here to improve their knowledge and understanding of football. For any person to de given the opportunity of managing a National Team it is a great honour and that is exactly how I feel.

○TS 24X7: Bhutan is currently ranked 188th in FIFA World Rankings but they are above Sri Lanka, Bangladesh and Pakistan- these three SAFF nations and only few steps below Nepal. Your first major challenge with the ‘Dragon Boys’ would probably be at 2018 SAFF Cup in Bangladesh in September. Do you feel that this competition can prove to be an important landmark for Bhutanese football in taking them to the next level if properly worked with the boys in the meantime?

●Trevor: The SAFF Cup will certainly be a good test to see what progress we are making. The Federation here are realistic about what can achieve, we are relatively young in football terms and have a young squad but it is up to me and my staff to make sure we are fit, organised and difficult opposition to play against when the tournament begins. Lets see where that takes us.

○TS 24X7: What are your expectations and targets from this new assignment that you are going to take up?

○TS 24X7: You are a well known figure in Indian football. Currently your former team Kingfisher East Bengal is fighting for the I-League title with NEROCA FC and Minerva Punjab who are in touch better positions. How do you feel the Red and Gold team has changed since the time you left and would also like to know your take on Kerala Blasters, another team you were associated with?

●Trevor: There have been many changes in personnel at East Bengal on the playing side, there are probably only 5-6 players left in the squad since my departure. Khalid and the officials have bought in players they felt can help the team win the I League and after many ups and downs I think it is between those 3 clubs to win the title.You can only ever ask that matters be in your own hands and at the moment Minerva has that advantage, they have made a remarkable improvement on last year and it is good to see one of our Bhutanese players , Chencho, playing well and scoring goals for them.
Kerala had a bad start to the ISL but David James has steadied the ship and took taken them to the brink of getting into the play offs, which I hope they do for Dave and for the fans as they have fantastic support and are the best in the ISL.

○TS 24X7: If Kingfisher East Bengal fails to win I-League this season, it would be fifteen years in a row that they would be without a top flight league. A large portion of the fans are seemingly enraged against the management and the scouting system of the club. As someone who was associated with probably the last glorious phase in the club’s history, do you feel that the Kolkata clubs need to be a bit more professional in some cases?

●Trevor: Until the officials trust the Coach enough to let him bring his own players, back his judgement and give him 100% support in on the field matters I feel the off field issues will never be to far away. Of course if EB win the I League this season all will be forgotten…….until next season, when it begins again. I dont think the scouting problem is an issue, East Bengal has a well run Academy in place the only thing that matters is are the young players good enough to play in the first XI, its then up to the Coach to make the decision and that is how it should be.

○TS 24X7: Currently two top flight leagues are running simultaneously in India- ISL and I-League. Talks of a probable merger are in the year. You were associated with both the leagues. Do you feel a unification of leagues or a lengthier top flight league with more teams can be a good and practical solution?

●Trevor: I think a longer season with more teams in it is the way forward but that would have to involve promotion and relegation otherwise what is the point of playing in the lower divisions. I realise that is a simple answer to a difficult question and it is a lot more complicated than that. The clubs and relevant Associations need to sit and talk to decide on a way forward the benefits and helps the process of improving Indian football at all levels.

○TS 24X7: Trevor, you will now be seen in-charge of India’s neighbours. If some prominent call comes from across the borders, would you be considering it in near future?

●Trevor: My only thoughts at the moment are to help Bhutan and do a good job personally, to take a job you have to be offered a job so whatever happens in the future will be the decision of someone else.

○TS 24X7: One final question, during your time in India you have been part of many glorious moments and also some downs at phases. Do you have any regrets from your time in this country which you may like to settle if you get an opportunity next time?

●Trevor: Regrets? No, would I have done some things differently yes of course. I made mistakes but I also got a lot of things right. I experienced highs and lows as any person does but I can assure you from the memories I take with being involved in football in India the good ones far outweigh the bad. 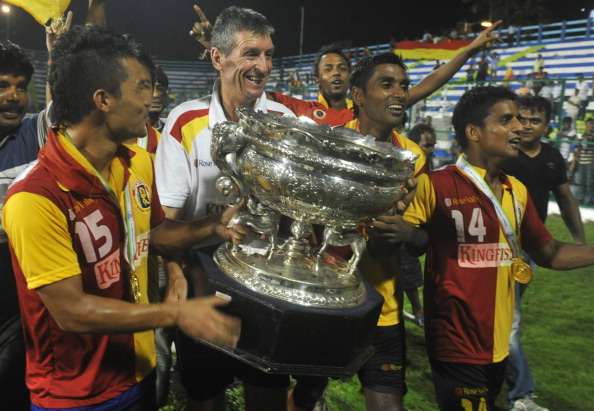