Fresh from their win against current champions Aizawl FC in their previous match, Shillong Lajong are looking forward to ending their season on a high note as they will be trying hoping to carry their winning momentum against East Bengal on Monday.

Meanwhile, East Bengal are showing no lack of confidence as their 7-1 drubbing of Chennai City in their previous game has provided the Red & Golds with renewed vigour and determination.

Even a defeat will keep East Bengal (29) in contention for the title, but for which they will have to win their last game against NEROCA FC (31) and hope for Churchill Brothers to defeat Minerva Punjab (32) at the same time. On the other hand, should the Red and Golds manage to rake up all six points from their last two games while the Punjabi outfit also win their final fixture, both the title contenders will finish on 35 points and East Bengal will be crowned champions on account of a better head-to-head record. The only chance NEROCA FC have to win the title is if they beat East Bengal and Minerva Punjab lose on March 8th.Meanwhile, should East Bengal, NEROCA and Minerva Punjab lose their remaining games, and Mohun Bagan win against Gokulam Kerala, the Mariners will be claiming their second I-League triumph. However, in the same circumstance, an exception of a draw would be sufficient for Minerva Punjab as they enjoy a superior head-to-head against Bagan.

Midfielder Hardy-Cliff Nongbri is out with an ankle injury. Rest are all fit and are likely to feature  in the tie.

None are injured. Main defender Eduardo Soares Ferreira is suspended due to 4 yellow cards. 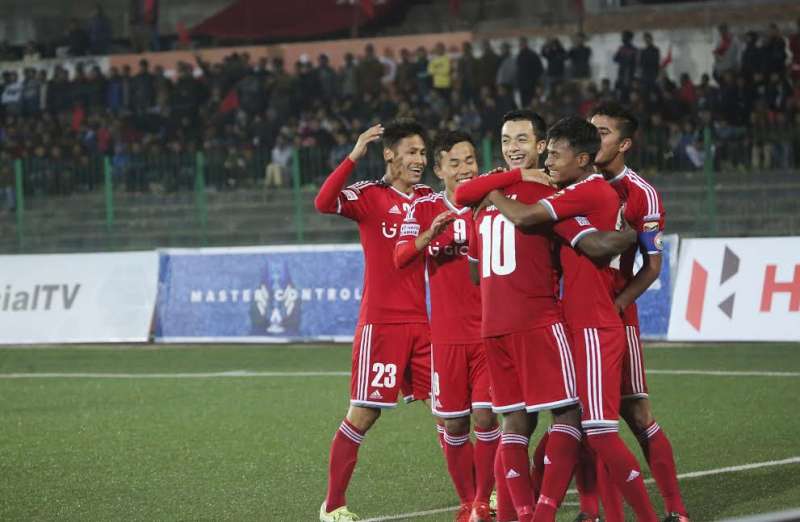 Knowing that a win will leave them self-dependent to land their first I-League title, expect East Bengal to go out all guns blazing. Dudu Omagbemi was in red hot form as he struck four times in the 7-1 humiliation of Chennai City, while the Nigerian’s late winner against Indian Arrows around a month ago also comes a long way.

Khalid Jamil’s men were nearly thrown out of the title race by ‘giant killers’ Gokulam Kerala until the Malabarians went on to defeat Minerva Punjab as well. East Bengal will hope not to require another part-favour from Kerala if they lose against Lajong on Monday, though Minerva Punjab would also need to lose.

East Bengal coach Khalid Jamil said, “We will be playing freely in tomorrow’s match. We are under no pressure whatsoever.”

Asked about what are their plans for this match particularly, Jamil said, “We are not thinking about the points or our position in the standings. We are only focusing on the game and we are going to go all out for the win.”

“Lajong is a very good team and they will be under less pressure tomorrow as they have nothing to lose since they are out of the league contention. They will also be playing on their home ground which is an advantage,” said Khalid.

“We are focusing only on the game. We will be playing with the same team but the starting XI will be finalised on Monday”, Jamil concluded.