As the game ended at Kalinga Stadium in Bhubaneshwar amidst torrential rain, it was the Mariners who emerged victorious courtesy of a Dipanda Dicka brace which saw them just edge past Churchill Brothers who took the lead courtesy of a brilliant Wilis Plaza finish. The win saw the Mariners book their quarterfinal berth in which they would either face the familiar Shillong Lajong or Pune City in what would be another mouthwatering clash. As Dicka’s brace cemented the Mariners’ debut win in the Super cup, we bring to you the five key talking points of the game:

When Wilis Plaza first arrived in India, the Red and Gold Brigade already saw him as the person that could be their main man who could fuel their I-League dreams. It was not to be, Plaza’s time at East Bengal came to an end, as he was released by the club towards the business end of this season’s I-League. His time at East Bengal, was filled with turmoil and saw him become the butt of many jokes for his misses especially against their eternal rivals Mohun Bagan. However, Willis Plaza seems to have turned the table for Churchill Brothers, the striker scored a brace against Delhi Dynamos and knocked them out of Super Cup. He also opened the scoring for Mohun Bagan and was a constant threat for the opposition defence. It seems that Plaza has almost become a new player after joining Churchill. It would be interesting to see, how far he goes.

● The Rise and rise of Dipanda Dicka:

Dipanda Dicka seems to be having the touch of Midas. Everything that the striker touches seems to turn into goals. Having finished as the I-League top scorer, the striker seems to be in no mood to stop scoring. If his first goal required a bit of luck as he missed the penalty and scored on the rebound, his second goal was impeccable as he tied up with Akram to score an incredible first touch finish. He seems to be on top of his game and enjoying every moment he touches the ball. Let’s hope, this golden touch of his keeps on continuing.

Monday was having a brilliant game as he led the Churchill Brothers defence in shape. Keeping, both the Bagan strikers quite in the first half, Monday started showing signs of injury early in the second half and was eventually substituted in the 55th minute of the match. Monday’s absence on the field, allowed Mohun Bagan to effectively use the aerial threat of Akram Morghabi as he tied up with Dipanda Dicka to provide the winner for the match.

It was exhilarating to see Yuta and Cameroon Watson bossing the midfield. Yuta doing all the dirty work of shielding the defence and the silky elegance of Watson to spread the passes was a treat to watch. Despite conceding an early goal, the Mohun Bagan midfield aptly supported by the wingers, Faiaz and Kadam ran like a well-oiled machine as Mohun Bagan came from behind to win the match. 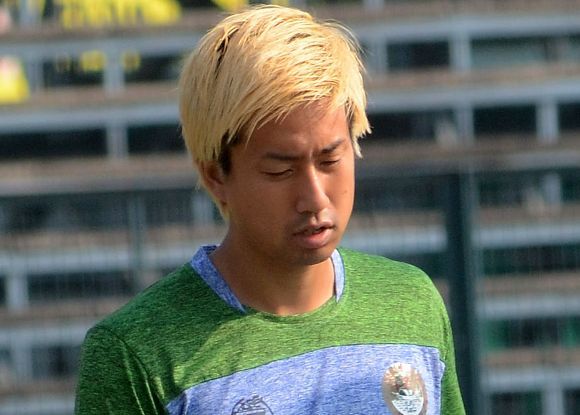 Mohun Bagan’s defence still not upto the mark. It is not that the team has poor players in the defensive areas but it is not clicking as a unit with lapses in concentration ultimately proving costly. Shankarlal Chakrobarty needs to sort out their defensive abilities which might prove detrimental to the Mariner’s campaign in the Super Cup.

The Mariners are through to the quarter finals as they eagerly await to find out who their opposition would be. They have enough firepower to go on all the way and win the first edition of the Super Cup.