FC Barcelona started the 2018/19 UEFA Champions League campaign with a victory. Barcelona will look to overcome memories of their European trophy drought this season even if they are arguably in the toughest group.

The match against PSV saw coach Ernesto Valverde field his best squad for the starting match.There was no room for underestimating as PSV bagged 21 goals in their last 5 matches.The Dutch side defeated ADO Den Haag 7-0 in their last Eredivisie fixture. Mark van Bommel kept an unchanged side at the Camp Nou.

Barcelona was dominant at Camp Nou and the end result was 4-0 for the home side. Leo Messi opened his 2018/19 UCL account with a hattrick and Dembele scored a goal thus continuing his consistent scoring form.

Let’s take a look at the five talking points from the game.

Barcelona were leading 1-0 on the 74th minute and Dembele turned to move away from two PSV players and curled the ball sensationally past Zoet.

Having scored 5 goals for Barcelona this season including La Liga, Spanish Super Cup and the Champions League, he has surely cemented his spot in the starting XI for some time.

He ended up being taken off in the 80th minute after Samuel Umtiti’s red card in order to reduce one forward to place a midfielder and a defender to protect the score.The crowd gave him a well deserved ovation.

Barcelona were held for the first few minutes till an individual brilliance from Messi broke the deadlock. A brilliant run from Ousmane Dembele resulted in a Barcelona free kick from the edge of the box in the 32nd minute. Messi scored the goal with an incredible curl and goalkeeper Zoet had no chance of keeping the ball out.

His second goal was a strike from a brilliant ball from Rakitić. 88th minute saw him complete his hattrick as he made the ball sneak past the goalkeeper. A ruthless display of attacking football which made him the first player to score eight Champions League hat-tricks.

The only blot on Barca’s copybook was the red card shown to Samuel Umtiti who will miss the trip to Wembley in a fortnight.

The Tottenham attack with the likes of Harry Kane, Son, Eriksen and Dele Alli will surely be a threat to Barcelona’s defense as they will miss an experienced centre-back. 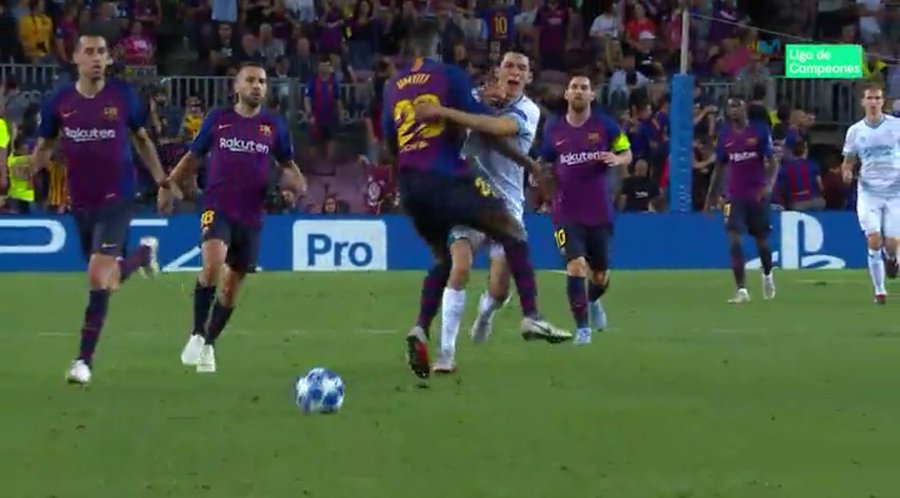 It was the 79th minute of the game when Umtiti obstructed Lozano’s run and made a second booking. It was unnecessary as Barcelona were already leading when Messi’s performance decided the contest.

Messi scored a brilliant hattrick to lead Barcelona to great start to their 2018/19 UCL campaign.

It started with a curling freekick towards the top right corner, followed by a beautiful first touch on way to his second goal assisted by Rakitic.With his 88th minute goal he broke two records.

One was the highest number hattricks in the competition, the other was a record goal tally in the Group stages.

Surpassing Ronaldo’s record of 60, he now has scored 63 goals to his name in the Group stages.

Mark van Bommel made his return to Camp Nou since the 2005/06 season, as he took PSV Eindhoven to Catalonia as coach of the Dutch side.

The former midfielder started the Champions League final against Arsenal that season and played just over an hour before being replaced by Henrik Larsson in the 61st minute, with Barcelona 1-0 down.

He scored four goals for Barcelona, but the fans will remember him for pushing Iniesta to his limit in the World Cup 2010 final.

“This is the first time I’ve been pushed over the limit,” said Iniesta of the game.

But the homecoming will not be worth remembering for Bommel as his team failed tactically at Camp Nou. With tough matches coming soon, it seems hard for PSV to make it to the next stage.